Yesterday I stumbled upon a way to create QR code for my contact information.

Wikipedia defines a QR code as: A QR Code is a matrix code (or two-dimensional bar code) created by Japanese corporation Denso-Wave in 1994. The “QR” is derived from “Quick Response”, as the creator intended the code to allow its contents to be decoded at high speed.

A QR Code is a bar code that can be scanned… 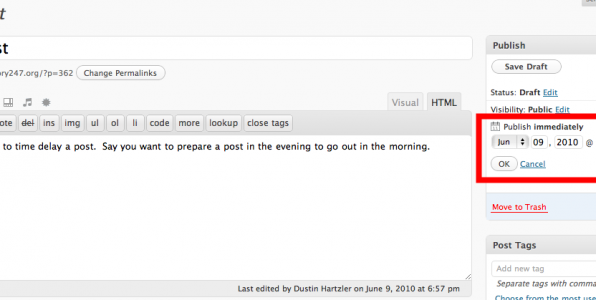 What if you want to prepare a post the night before you actually want people to see it? Or you are going to be on vacation and won’t have access to the internet to make your daily posts? Well, Wordpress is sweet and it allows you to time shift when your post can be seen by your viewers.

Have you every Googled your name? Or maybe your business? If so, have you ever made a video about it? Google has made it possible for you to create your own video. It’s super easy, check it out at google.com/searchstories…

Getting a Top Ranking on LinkedIn

Content from ViralNetworkers.comLewis Howes knows his stuff about Linkedin and being the co-author of “LinkedWorking” I would hope so. His story about how he became so knowledgeable about LinkedIn is not only inspiring but a bit hilarious. Watch the following video to improve your LinkedIn Ranking.

Go on and try what he says. I did it, and now I am #1 when someone searches Wordpress, what my…

This is a site that I have partnered with a Pastor from Columbus to spread the good news of Jesus Christ.  Check out Victory247.org and sign up for the daily devotion, it’s delivered to your email everyday for…

I highly recommend using Dustin as a resource as he will save you hours of headaches!